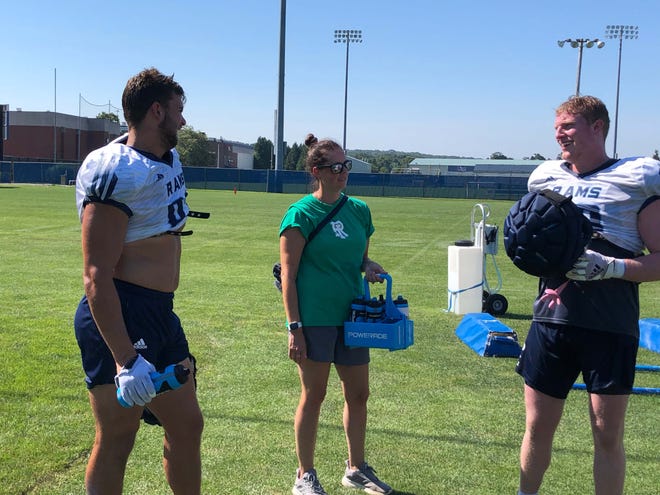 Woonsocket’s Michelle Barber works behind the scenes for URI athletes

SOUTH KINGSTOWN — Granted, members of the University of Rhode Island men’s and women’s basketball teams and soccer team get the lion’s share of the advertising. And rightly so.

But lost in the confusion is the work of Michelle Barber of Woonsocket, who is the assistant athletic trainer.

An associate trainer, under the direction of the head coach, oversees the physical examination and treatment of student-athletes to maintain peak physical fitness and competitive participation. In addition, they support student athletes who engage in high-impact, high-intensity sports.

Aside from the work she does for the Rams, what she’s done outside of the coaching room is arguably even more important.

A 2003 graduate of the University of Connecticut, Barber received her Bachelor of Science degree in Exercise Medicine and a Master’s degree in Kinesiology from URI.

Among other things, she has been active in research into athletes who have been diagnosed with inflammatory bowel disease (i.e. this is a term used to describe diseases associated with chronic inflammation of the digestive tract such as ulcerative colitis and Crohn’s disease).

“That’s what my master’s thesis was about,” Barber said. “One of my exercise science courses involved some research, and I found that there was a large amount of research in the population being diagnosed with inflammatory bowel disease.”

Barber’s research helped confirm that various forms of treatment involve the use of anti-inflammatory drugs, antibiotics, and even a nutrient-dense diet.

Barber has also conducted research on hydration status in adolescents, which was published in the Medicine and Science in Sports and Exercise journal.

“That was with youth study camps,” Barber said. “We went to the camp and got parental permission, collected urine samples and asked how high their thirst was compared to what their urine samples told us.

“In layman’s terms, we found that adolescents’ thirst was not an accurate indicator of their hydration status.”

Due to her affinity for athletics, Barber switched majors after enrolling in Connecticut.

“I honestly started out with a bachelor’s degree in physical therapy,” Barber said. “Honestly, my older sister [Christine Levereault] is an athletic trainer. She was in school at the same time as me.

“Our family went to games wherever they were. She would come home and practice her taping skills. That’s where I made my decision [being an athletic trainer] would be a more desirable profession for me.”

Before being hired by URI, Barber volunteered with the fall sports teams at Manchester High School in Connecticut and at the Hartford Family Clinic. After graduating, she was honored with the Doug Casa Award for Continuing Research. (Casa is a professor in the Department of Kinesiology in Connecticut).

“This research was for the hydration work I did with him,” Barber said. “What I did at Manchester and the Hartford Clinic was part of the athletic training schedule.”

In 2005, Barber was recognized for Outstanding Graduate Studies Research for her work from her dissertation and research. She has also helped conduct research sponsored by Gatorade, the National Safe Kids Campaign and UConn.

“It was more of my work with UConn,” Barber said. “During grad school, my grad advisor Doug Casa asked me to come back and spend two summers researching with him. We traveled to youth summer camps and looked at their fluid status.

“Doug Casa is the director of the Korey Stringer Institute at UConn. To receive this award was incredible.”

Stringer was an offensive tackle for the Minnesota Vikings, who died in 2001 from heat stroke during training camp.

Initially, Barber was a Graduate Assistant Trainer at UConn. She credits her sister Christine for inspiring her.

“She was the most important influence in my transition from physical therapy to sports training.”

“I took a year-long course at UConn and took that exam in 2005,” she said. “This requires additional educational units to be submitted in order to maintain certification.”

In both Connecticut and Rhode Island, Barber has worked with a variety of teams including football, men’s and women’s soccer and basketball, women’s hockey, softball and men’s track teams.

“I don’t think I treat her any differently,” she said. “I think later in my career, now that I’m a mother, I feel like the male athlete sees me as a motherly, easygoing figure.

Barber was honored with the Rhode Island Trainers Association of the Year Award, a testament to her prowess in her field.

Criteria for this award include being a highly qualified, multi-skilled medical professional who provides services or treatment under the direction of, or in conjunction with, a physician in accordance with his education and training and the laws, rules, and regulations of the state. Services provided by athletic trainers include primary health care to prevent injury and disease, promotion of well-being, training in emergency screening, therapeutic interventions, and rehabilitation from injury and disease.

To say that Barber was humble when she received this award would be a gross understatement. “I think that was just a way to show their appreciation for everything I’ve done for the federation,” she said.

Beyond the fields of practice

In this role, she helps ensure that applicants have proof of graduation from an accredited college or university and meet minimum athletic training requirements set by the Board by completing specific course requirements, including human anatomy, human physiology, first aid, and CPR. Diet, personal health and sports training techniques, etc.

Barber is in the middle of her 19th season at URI and understandably has taken a lot of satisfaction from her work.

“First, in the eight years that I raised my son [Jaxon], it was in the collegiate athletics environment,” she said. “My co-workers support me a lot in my work as a working mother. When I bring my son to work, the coaches and athletes love sharing their sport with him. For me it is amazing to see.

“But most of all, it’s so rewarding to see an injury from start to finish and to see the athlete return to the sport he or she loves.”

Sold out: Hospitality firms set to cash in on upcoming long weekend