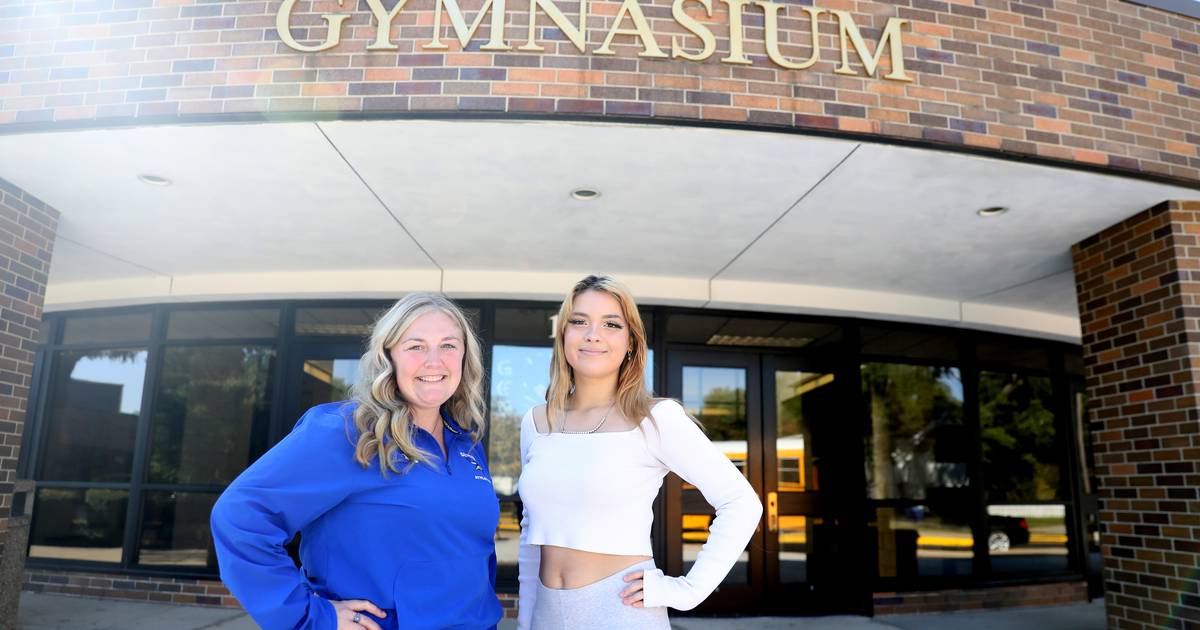 When Geneva High School athletic coach Nicole Collins volunteered to coach the school’s Sept. 17 homecoming dance, little did she know she would end up helping a student with a medical emergency.

After 17-year-old senior Bridget Archbold collapsed while dancing in the school gym and then stopped breathing, Collins went into action to perform CPR.

“People call me a hero, and yes I would call myself a hero, but I feel like I did my job. If I hadn’t been there, the outcome could have been very different,” Collins said. “I know I saved her life. That’s something I’ve been trained to do… respond to emergencies.”

Collins, who graduated from Geneva High School in 2013, was supervising students outside the gym when she heard the music stop abruptly around 9 p.m. She said when she went to the gym to see what had happened, she saw a school administration carrying Bridget.

“I checked her pulse and there was no pulse. I rolled her from her side onto her back and once she was on her back I started CPR and applied compressions,” Collins said. “I asked a [school] admin to get the [automatic external defibrillator] outside the gym, and another admin cleared the gym. There was a Geneva policeman [at the dance] who called an ambulance. I did two rounds of CPR and on the second round she started coughing and came to.”

Archbold said she doesn’t recall falling on the floor or undergoing CPR. She said when she woke up the gym was empty and she felt very confused.

“I started crying because I felt like I was ruined [the dance] for everyone,” she said. “It hurt to see my colleagues so upset about what happened to me. When I went back to school everyone was so concerned and said they were glad I was fine.”

Paramedics took Bridget to Northwestern Medicine Delnor Hospital in Geneva, where she underwent tests. She was sent home later that night. Tests showed she had no heart problems but had suffered a seizure, Bridget said.

Bridget’s father, Jeff Archbold, said his “heart just stopped” when he received a call from school about what had happened to his daughter. He said he was very grateful that Collins was at the dance.

“It’s very scary to get a call from school on Saturday night to hear that your child has collapsed, had a seizure and stopped breathing,” he said. “I am very pleased that our schools are taking the time to train staff on how to perform CPR. Precious time flies when a person is in a physical emergency. Nicole’s ability to see the situation and act quickly was amazing. It was really a team effort from the school. So the staff at GHS really shone that night [Homecoming] dance. You taught us a great lesson about what it means to be prepared.”

Bridget will undergo further tests to determine what caused her seizure. She said she was “anxious” and “stressed” because she still doesn’t have a definitive diagnosis.

“Someday we’ll find out [what caused the seizure]but I don’t want it to limit me and my activities,” she said.

Bridget and Collins had never met before the homecoming dance. When she returned to school, Bridget brought Collins flowers, a mug and a handwritten note to thank her.

“It was really nice to see her. I feel like she saved my life. If she hadn’t been there, they probably would have waited to resuscitate and I would have died,” Bridget said. “The shock of what happened hasn’t really worn off yet. But I’m glad how well my colleagues and the school handled it [the situation].”

Collins said Bridget gave her “the biggest hug” when the two met.

“It makes me feel a lot better to see her come into my workout room and see that she’s getting the follow-up care that she needs,” Collins said. “The director came over to make sure I was okay and thanked me [at the dance] and the teachers all came and thanked me. That gives me a good feeling, because that’s what I’m trained for. I appreciate everyone reaching out to make sure I’m okay. I’m glad Bridget is doing well.”

After years of training, this was the first time Collins had to perform CPR, she said. It’s much more difficult to administer to a person than to a mannequin, she said.

“It’s scary, but at the same time you practiced it,” Collins said. “It’s a lot harder to do deeper compressions on a sternum, but you never know when things like this will happen. I believe that everything happens for a reason and I am [at the dance] definitely made a difference. I think for the future I will continue to do more with the dances, so [the school district] knowing they have someone to help them if anything happens again.”