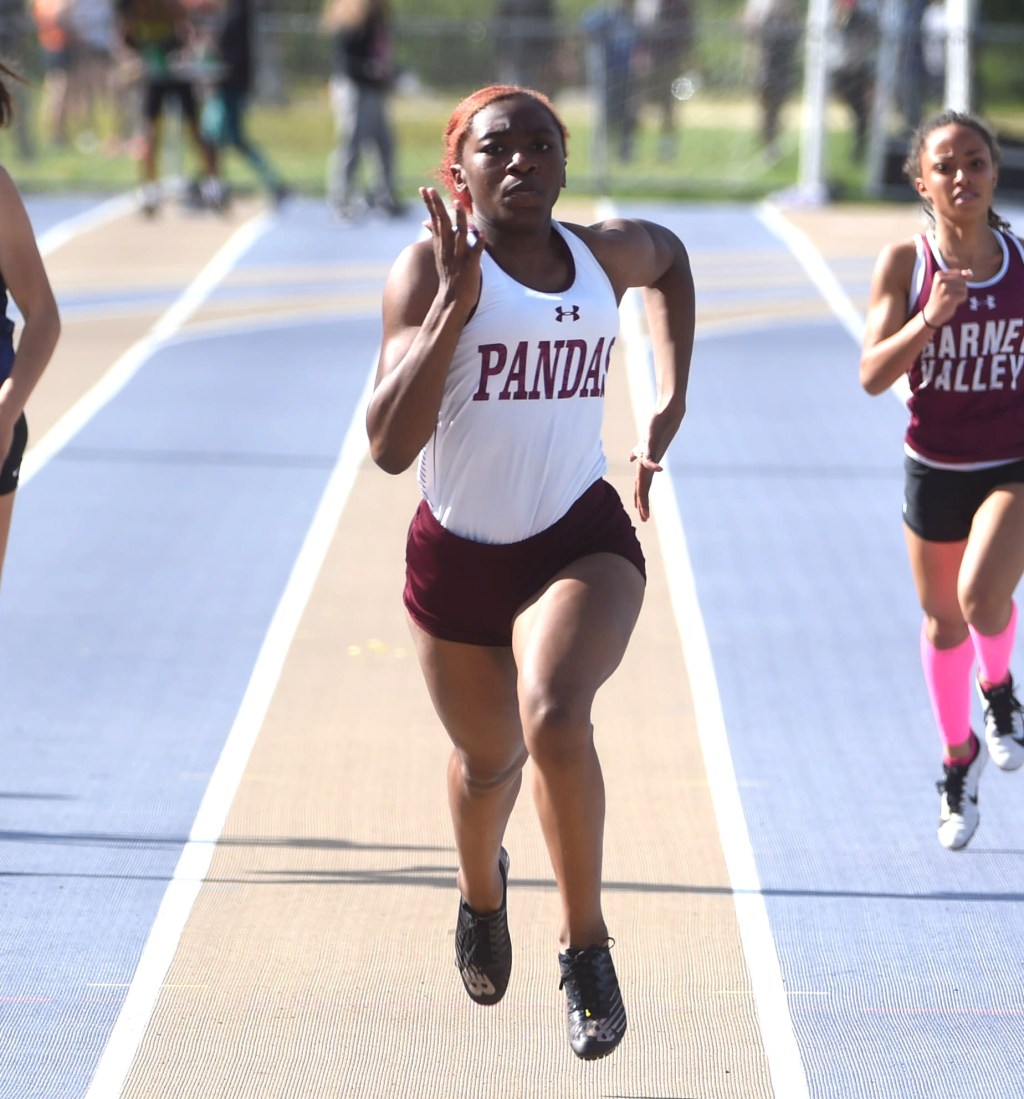 She was mobbed by her teammates as soon as she crossed the finish line.

Elliott’s anchor split of 59 seconds allowed the Fords to snatch Strath Haven’s streak of 11 straight team titles in dramatic fashion. Haverford entered the last event five points behind the Panthers in the team standings but ended up winning by two points, 120-118, thanks to wins from Elliott, Olivia Cieslak, Erin Olsavsky and Aubrey Leneweaver and a sixth-place Strath Haven.

“This is so rewarding,” Elliott said. “We’re all here for each other today.”

Cieslak took the lead early, with Olsavsky and Leneweaver extending it before Elliott gave the Fords a four-second win over Penncrest.

“We really needed this win,” said Leneweaver. “Our goal was to beat Strath Haven and I knew I had to give Morgan a good lead so she could bring him home strong.”

The win was the third of the day for the Fords on a cold and rainy afternoon at Upper Darby’s Memorial Field, and Leneweaver and Elliott were involved in all three. Leneweaver started the meeting by winning the 300 intermediate hurdles in 44.11 seconds.

That was no surprise. Leneweaver came in second in the state in the 300, according to milesplit.com. The hard part was battling wet conditions and a strong field that included Strath Haven’s Teghan Sydnor and Chester’s Alina LaForest, who started fourth and eighth in the state.

“They’re all great runners,” Leneweaver said of the competition. “You know they’ll be right there with you and if you make a little mistake, they’ll run right past you.”

The weather didn’t seem to bother Elliott either. She won the 400 (59.07) for the second year in a row and gave the Fords the team title with her strong anchor leg.

“We had a lot of encouraging conversations,” Elliott said. “A lot of people were injured but everyone pushed through to give us this win.”

Penncrest’s Ruby Schwelm nearly missed the 3,200m, the only race she had competed in. The metric two mile was scheduled to start at 6pm but was pushed back a few minutes due to weather conditions.

The 2021 Daily Times Runner of the Year in girls’ cross country didn’t have much time to warm up and was the last athlete on course for the event, but that didn’t stop her from challenging Notre’s competition record of 10:49.67 Dame’s Maria Seykora in 2011.

“I thought I had five minutes left,” Schwelm said. “I kinda panicked”

Schwelm took control early and steadily pulled away to set a winning time of 10:51.23. Not bad considering this was her first time officiating the event in competition.

“I’ve only done it twice this year as training,” said Schwelm. “I think I could run better next time. I had a really slow lap the first mile. That would have brought it down a bit more.”

The coach was pushed by Cieslak for most of the race. The two ran shoulder to shoulder until Trainer pulled away on the last lap to set a personal best of two seconds.

“I knew she was on my shoulder, so I kept pushing her,” Trainer said. “I would keep picking up speed until I felt she wasn’t there.”

Bonner-Prendergast All-Delco Taylor Johnson was the only double singles gold medalist. She placed first in both the 100 and 200 meters and also helped the Pandas finish sixth in the 4 x 100.

“It was tough,” Johnson said. “It was cold but I knew it was going to be bad weather. I just had to go out there and do my best, and I did.”

Springfield’s Emily Barlem, Carly Walters, Caroline Walters and Beth Schearer took gold in the 4×100 relay in a season-best time of 50.55 seconds. In other finishes, Notre Dame’s Emma McGuinn won the 100 meter hurdles in a personal best of 15.29, Kelsie Robinson led a 1-2 Penncrest finish in the 800, Robinson won in 2:20.19 followed by teammate Hannah Puckett in 2:20.47.