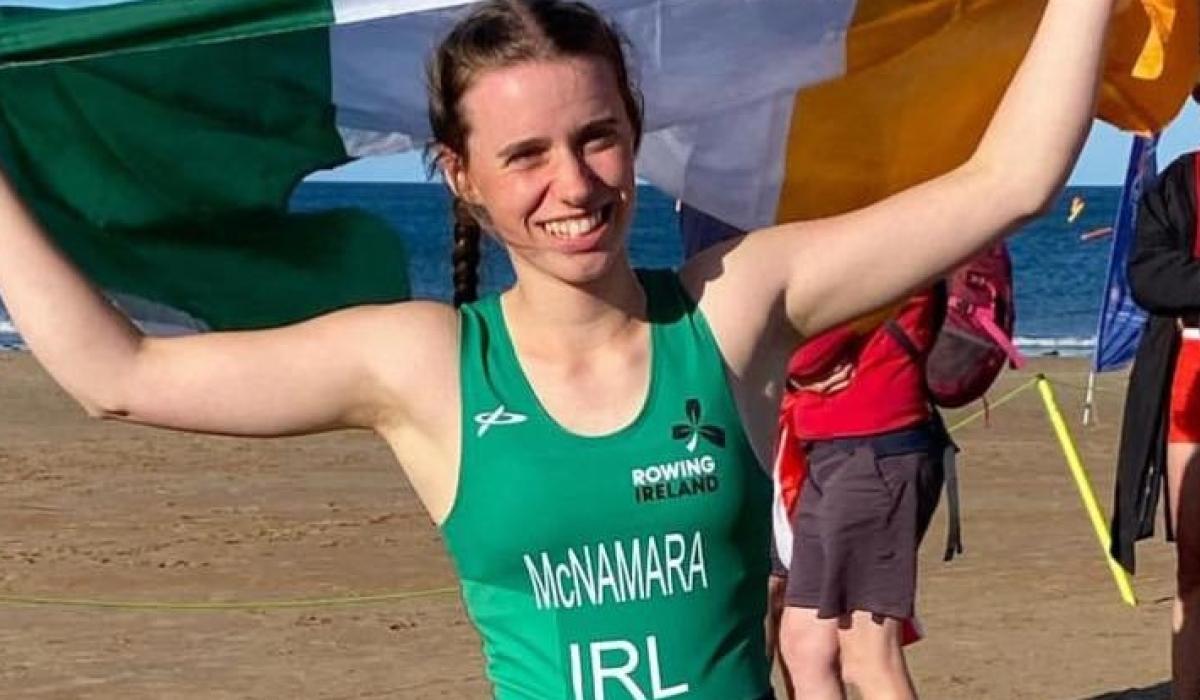 Barnesmore teenager Méabh McNamara is proving to be a dedicated and inspiring young athlete.

The 17-year-old rower made her international debut last weekend when she represented Ireland at the Home International Beach Sprints in St Andrews, Scotland.

Méabh has had her sights set on competing for her country for some time and hopes this is just the beginning of her international career.

She told the Donegal Democrat: “I’ve always wanted to row for Ireland so a dream came true to compete in an international event when I was 17.

“I met the team three weeks before the event at a training camp in Arklow, where we also got our team gear. Everyone from athletes to boaters and everyone in between has been so nice and I know I’ve made lifelong friends on the team.

“It was an honor and a privilege to row in the green Irish one piece at St Andrews and it will be a memory I will cherish forever.”

It was an opportunity to try rowing through Abbey Vocational School in Donegal Town that sparked Méabh’s love of the sport.

“Patrick Brady and Sharon Meehan from Donegal Bay Rowing Club came to our school for an eight week rowing coaching block during our PE classes.

“I fell in love with the sport straight away and have never regretted it.”

So what was it that attracted Méabh to rowing that has given her international sports status?

She said: “Growing up I tried a lot of different sports but none of them was as special to me as rowing.

“All the club members were so welcoming and encouraging from day one. Coaches Patrick Brady, Seamus Maguire and Luke Keaney are constantly pushing me to improve and row to the best of my ability.

“The feeling of rowing a boat through Donegal Bay come rain, hail or shine is indescribable. The adrenaline that comes with coastal rowing is like nothing I’ve ever felt before.”

Having completed the transition year, Méabh is now beginning the Leaving Cert cycle.

This will bring new challenges but she is determined to keep rowing at the highest possible level and is fully aware of the commitment that comes with it.

“Balancing training and studying will be a little more difficult than it has been in recent months,” Méabh said. “I train most evenings and plan to keep doing so in the future.”

And with two major international competitions coming up in the next few months, the Barnesmore girl has plenty of motivation.

“In October I will represent Ireland in two events,” she said.

“First, I have the World Rowing Beach Sprint Finals October 14-16 in Saundersfoot, Wales, where I will be rowing in doubles with my partner Grace Masterson.

“I will be competing in an individual at the European Rowing Beach Sprint Championships in San Sebastian, Spain from October 27th to 30th.

“It’s going to be a busy month of training and racing, but I’m really looking forward to competing again for my country.”
Longer term, Méabh plans to develop as a rower and use her experience to benefit her club.

“I will continue to train hard after the competitions in October,” she said.

“I have one more year of rowing in the junior category before I move to the seniors.

“I will take every opportunity and use what I have learned to improve myself and pass it on to other club members.”

And it opens up a world of opportunity for those competing in the relatively new discipline of the beach sprint.

“The rowing beach sprint that I’m competing in will be introduced at the 2028 Olympics, so I’m hoping that one day I’ll have the chance to row at the Olympics,” Méabh said.

The Beach Sprint format begins with a sprint on the beach between 10 and 50 meters. After entering the boat, the rower slaloms around two buoys, then spins around a third buoy at 250m and rows straight back to the beach before the rower exits the boat and runs to the finish line.

It’s fast-paced, races are often decided in fractions of a second. Additionally, no two events are alike as tides, waves, winds, changing currents, local conditions and even the type of sand underfoot all affect participants.

Listening to Méabh, it’s clear that she enjoys all the challenges of her sport and works hard to be prepared for whatever conditions race days can throw at her.

Despite competing at the highest level herself, Méabh believes rowing can be enjoyed by everyone.

“I would recommend everyone, regardless of their age or ability, to try rowing at some point,” she said.

“The last four years I’ve spent as a member of Donegal Bay Rowing Club have been some of the best of my life. The experiences and opportunities you can derive from the sport, especially coastal rowing, will stay with you forever.”

Méabh is keenly aware of the support network around her that has helped her develop as a rower and focus her attention on training.

“I’d like to thank my coaches Patrick, Seamus and Luke and all the other members of Donegal Bay Rowing Club,” she said. “I would not be the rower I am today without their continued encouragement and support.

“I am also very grateful to the Seamanship Center Killybegs, The Central Hotel, Moll Industries Ireland Ltd, Magee 1866 and O’Reillys for their sponsorship of international events.

“And a big thank you to my parents, family and friends who have supported me every step of the way.”

When asked if there were any female athletes who inspired her, Méabh replied: “From a young age, I admired Katie Taylor’s drive and determination to excel as a woman in sport, a sentiment we share.”

Although women have many more opportunities in sport than they used to, the importance of role models should not be underestimated. And Méabh is well on her way to being an inspiration in her own school, club and community, as well as on a larger international stage.