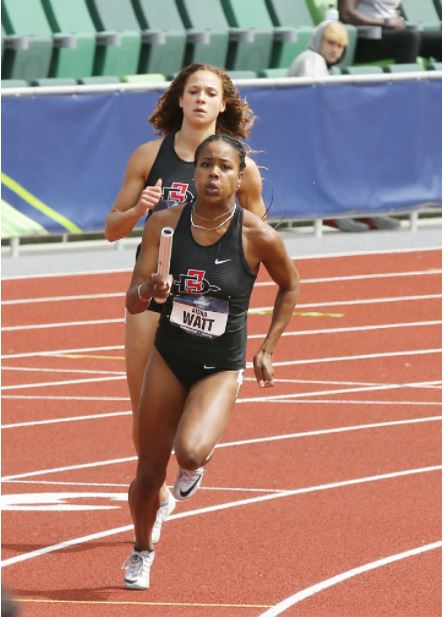 
The San Diego state athletics team’s season came to an end last Thursday when the 4 × 100 meter relay finished its race at the NCAA Outdoor Championships at the University of Oregon.

The team consisting of Tai McDonald sophomore, Danae Dyer sophomore, freshman Aisha Watt, and freshman Jada Moore ran the race in 45.40 seconds, but were later disqualified after a review found there was an “exchange outside of.” Zone three ”was there.

The 4 × 100 meter relay team members were the only SDSU representatives to compete in the NCAA Outdoor Championships and have had a past competitor in 23 of the last 24 championships.

SDSU is the only non-Power Five school that has a 4 × 100 meter relay team competing in four of the last five NCAA outdoor championships.

Despite a disappointing end-of-season race, the Scarlet and Black have some things to be proud of and think about ahead of the next season.

The Aztecs had 14 athletes qualifying for the NCAA West Region Prelims (most since 2008) after winning the Mountain West Conference Championships. At the MWC championships, SDSU won seven gold medals, three silver medals and two bronze medals. As a team, the Aztecs collected 161 points (most since 2013).

The 2021 track and field season was unlike anything the athletes had experienced before. The COVID-19 pandemic resulted in the cancellation of the 2020 outdoor season and the 2021 indoor season that preceded this outdoor season. There was uncertainty as to whether the outdoor season would take place in 2021 or not.

The uncertainty and battle over the pandemic and its logs forced the team to spend most of their time together and forge a bond that helped the team succeed this season.

“I think COVID brought us closer together because we all had problems,” said Watt. “It helped that everyone went through it, so we all had to get together and do it together.”

During the trainings and meetings, the team had to rely on mutual support. Due to COVID-19 protocols, fans were not allowed in meetings and contact with others was limited to teammates and team staff.

Watt’s help and support received from her teammates helped her succeed in her first season.

“My teammates were the best,” said Watt. “When I started seeing results, they texted me and came up to me while I was training and told me how proud they are of me and how great it is. It was amazing that they went out of their way and said that they noticed the hard work I put in. That made me want to keep doing it. “

Watt was part of the 4 × 100 meter relay, which consisted exclusively of lower classes (two second graders and two freshmen). She will never forget the experience of participating in the NCAA Outdoor Championships in Oregon.

“It was amazing,” said Watt. “Jada (Moore) and I talked about how I remember seeing those meetings in high school with my dad and not really thinking I would ever be there and it was great to be there. It was surreal to see all these athletes and to know that I am among them. “

Head coach Shelia Burrell set himself the goal of winning the conference championship at the beginning of the season. All meetings during the season served to prepare for the MWC championships.

During the training sessions and encounters, the athletes tried to give their best until the championship, jumping and throwing. At the conference championships, the Aztecs achieved five grades, which are among the five best ever in school history.

Winning the MWC championship is the highlight of the season for Watt.

“That day and that energy was great,” said Watt. “We were just trying to get into the top three and I didn’t even think I was going to score that day and then we won in the end.”

Watt and her 4 × 100 meter relay teammates will return next year looking to improve after an impressive season.

How to build a business loan

World Athletics: Olympians in Tokyo faced a “worrying” level of abuse on…